This small city in Polk County is one of the fastest growing areas of Central Florida, thanks to the expanding Championsgate area, and its ideal Central Florida location. Situated just a few miles from I-4, residents can quickly get to Disney and avoid the sometimes congested Orlando traffic. If traveling eastward on I-4, Lakeland and Tampa are also a short car ride away.

Known as the four corners area, a distinction because four separate counties border each other in one spot (Lake, Orange, Osceola, and Polk) just a few miles from Davenport. This area is also distinctive for many other reasons.

Originally a Fort in the early 1880’s, its name changed a few times before becoming incorporated as Davenport in 1915. The County itself is named for President Polk, who was sworn in as President the year after Florida became a state. Well known for gently rolling hills, more than 550 freshwater lakes in the county, and farm rich lands, it should be no surprise it has become a magnet for residents and tourists alike.

And, of course, there are the renowned Championsgate Golf Courses, designed by Greg Norman just minutes from Davenport. This area is resort living and vacationing at its best, with the 4-star Omni Hotel, expansive clubhouse, and amenities for the whole family.

Davenport also has the best of shopping and dining in its own right, with Posner Park, a newly built mixed-use retail, dining, and entertainment hub. Locals will also point to many small mom and pop diners and shops which are a must visit when stopping downtown.

With a superb central location and an enormous variety of offerings including villas, townhomes, waterfront homes, and land parcels, this is truly a booming area with endless possibilities. 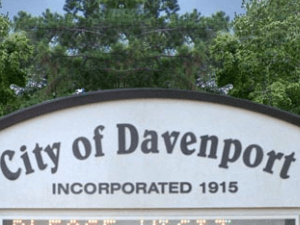